The African Americans, Many Rivers to Cross – Episode 1: From Africa to Virginia to Mississippi 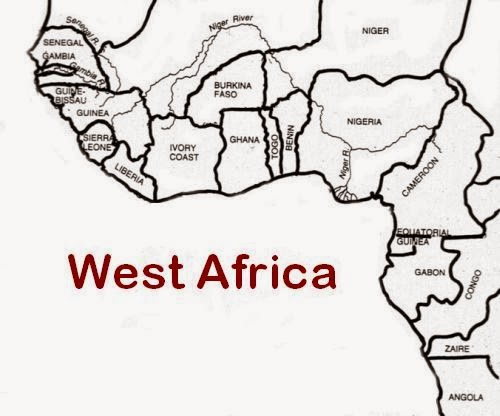 On this past Tuesday, the first episode of The African Americans: Many Rivers to Cross series aired on PBS with great anticipation from many historians, history buffs, and genealogists.  The first episode was appropriately titled The Black Atlantic because it encompassed the historical experiences on the other side of the Atlantic – in our wonderful motherland of Africa – that led to the creation of the “African American.” Skip Gates highlighted historians’ claim that the first Africans that touched American soil arrived in Jamestown, Virginia in 1619.  This episode also focused on Edward Ball’s remarkable research of a 10-year-old enslaved girl from Sierra Leone. She was stolen and transported to Charleston, South Carolina in 1756. After being purchased by planter Elias Ball, she was given the name “Priscilla.” These were just two segments of this first episode, but they will serve as the overarching theme of this blog post, From Africa to Virginia to Mississippi.

I recently became a resident of the state of Virginia.  As I explore the rolling hills of this beautiful state, I often wonder how many of my enslaved ancestors were transported here directly from West Africa or from the Caribbean via West Africa.  Transatlantic slave trade data, in which I will expound upon in this post, suggests that many were. In fact, most African Americans – descendants of enslaved people brought to American shores – had a number of family lineages that began here in Virginia.  Some of those lineages may have started back as early as 1619 in Jamestown, Virginia, but many of those lineages began later as enslaved Africans were most heavily transported into the state from 1676 to 1776.  In essence, my moving to Virginia felt like I was almost completing the circle, although the American beginnings were filled with austere hardships. My completion of that circle will come one day when I revisit a nation in West Africa, stand in the vicinity of where a known African ancestor was born, and touch the soil they were taken away from.

The matri-lineage of three of my Virginia-born ancestors has been linked back to West Africa via DNA analysis by African Ancestry, Inc.  My father’s great-great-grandmother, Caroline Morris of Warren County, Mississippi, was born around 1820 in Greensville County, Virginia.  Her matri-lineage matched the Tikar people of Cameroon.  Perhaps, my “Priscilla” was Caroline’s maternal grandmother or great-grandmother?  My mother’s great-great-grandmother, Fanny Barr, was born somewhere in Virginia around 1790. She was sold down south to Abbeville, South Carolina by 1810, and later taken to Pontotoc County, Mississippi in 1859, where she died at the old age of near 100.  Her matri-lineage matched the Yoruba and Fulani peoples of Nigeria. Perhaps, another “Priscilla” in my family tree was Grandma Fanny’s maternal grandmother?  My mother’s 4X-great-grandmother, Jenny Boyce, is believed to have been born here in Virginia around 1765. Jenny is my “mitochondrial (mtDNA) ancestor,” and my mtDNA matches the Fulbe (Fulani) people of northern Cameroon; their origins began in northern Nigeria.  Perhaps, my third “Priscilla” of many was Grandma Jenny’s mother and stolen from Nigeria?

Was it coincidental that my three DNA-tested lineages from Virginia have been linked back to Nigeria and neighboring Cameroon?  My answer is not necessarily.  Why?  Well, let’s see what transatlantic slave trade facts and statistics reveal in a nutshell.

Historians have estimated that nearly 100,000 Africans were disembarked on Virginia shores; many were directly from Africa. Consequently, Virginia ranked second among the areas where slave traders imported at least 30% of all Africans that were imported into North America. South Carolina ranked first. The African “hotspots” where Virginia slave traders obtained most of their human cargo included the Bight of Biafra region, the Angola-Congo region, the Gold Coast region (Ghana), and the Senegambia region. The following chart gives the percentage of Africans imported into Virginia from identifiable African regions [Source: Philip D. Curtin, The Atlantic Slave Trade: A Census (Madison: University of Wisconsin Press, 1969), 157.]: 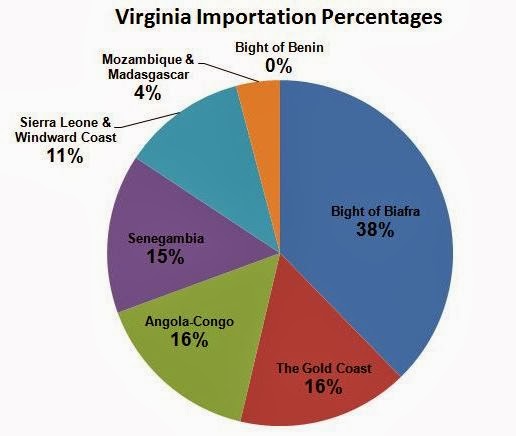 See a great African ethnic groups map at this link.

The five river districts in Virginia that were the primary entrances where many enslaved Africans were disembarked were the following: 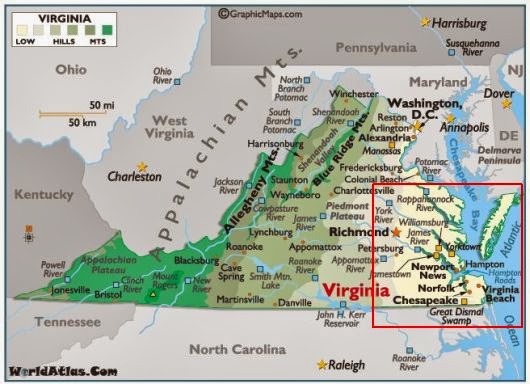 By the time slavery ended in 1865, more than 500,000 enslaved Virginians had been transported to the Deep South states (Alabama, Mississippi, Tennessee, Louisiana, etc.). Historians have estimated that nearly 350,000 of that 500,000 had been traded rather than being transported by their enslavers who relocated to the Deep South (Tadman, Michael. “The Interregional Slave Trade in the History and Myth-Making of the U.S. South.”, 11-46).  Grandma Fanny Barr was one of them.  Both situations resulted in the permanent separation from family members whose circumstances allowed them to remain here in Virginia. There’s no wonder that my DNA segments, as well as many others, are matching people whose immediate families are from Virginia.  In many of our family histories, Virginia, as well as South Carolina, is no doubt Ground Zero in America. 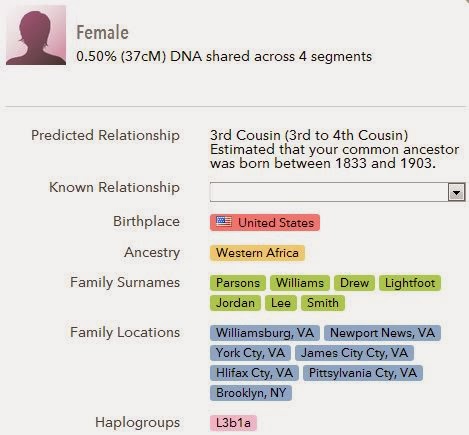 One of my mother’s Virginia-based DNA cousins from 23andMe who is currently anonymous.

The African American Blogging Circle is a group of genealogy bloggers who are sharing their family stories, seen through their own personal lens, from the PBS series, The African Americans: Many Rivers to Cross.  Click here for a list of the participating bloggers and check out their stories.

Posted by Melvin Collier at 5:11 PM