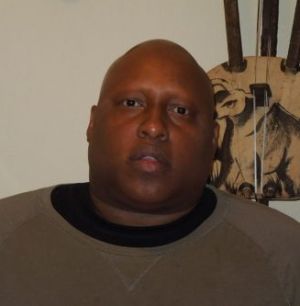 On May 10, 2013, I received the following message on Facebook from Raquel Tomlinson. She stated, “My husband is one of your cousins on 23andMe. His name is Christopher Harris.”  I checked my 23andMe DNA account, browsed my Relative Finder database, and found his name among my 400+ “DNA cousins”.  However, what was most interesting is that he is a Black Canadian!  How am I related to a Black Canadian?  Dr. Christopher Harris resides in Toronto, Ontario. He recently received his Ph.D. in Education from the University of Toronto.

His birth parents met while his biological father was a foreign engineering student at the University of Windsor. His birth mother was 18 years old when she gave birth to him. She herself had been in foster care for all of her life; she was given up for adoption after her birth, as her birth mother (Christopher’s maternal grandmother) allegedly got pregnant with her outside of her own marriage.  Coincidentally, Christopher's adopted family’s last name is also Harris (no relation); they are from Barbados. His adoption was a closed adoption. However, the information thus far is based on his adopted mother's memories. Christopher recently filed an application to receive his birth parents' names, a process that could take a year in Canada.

But how is Christopher related to me? Is he on my Mom’s side or my Dad’s side?  Utilizing the family inheritance tool in 23andMe, I compared him to other known cousins in my database. Lo and behold, my findings raised eyebrows and helped to determine more!  Christopher also shares DNA with Lenro Morgan and NeNise Smith, my cousins on my Dad’s side.  We are the direct descendants of Robert “Big Bob” & Jane Ealy, as well as Lucy Kennedy, from Leake County, Mississippi. They were my father’s great-grandparents.

As of Jan. 1, 2015, a total of 11 descendants of Bob & Jane Ealy have taken the 23andMe DNA test. Three people (in red) are closely-related to Bob and/or Jane Ealy. See note below in blue. Christopher matches 10 of us! Additionally, he matches the family members in blue and red in the following chart on the X chromosome. This verifies that the connection is on his mother’s side. The DNA matches to Christopher as of Jan. 2015 include the following:

Note: Andrea, Mahadji, and Lisa are great-granddaughters of Charles & Annette Atkins of Avoyelles Parish, Louisiana. There is no family knowledge of family members being in that parish in Louisiana. However, they all match Ealy descendants, and they also match Christopher, Violet, and NeNise on the X chromosome, too! After analyzing family trees, I strongly suspect that the unidentified mother of Charles Atkins was either a sister or daughter of Jane (Parrott) Ealy.

All branches of the Bob & Jane Ealy Family Tree can be seen on the Ealy Family page. Branches E5, E6, and E11 are actually three children (Paul, Bob Jr., & Martha) of Bob & Jane Ealy who married three children (Adeline, Mattie, & Albert) of Lucy Kennedy. Therefore, those three family branches are double related. However, there’s little doubt that Christopher’s maternal grandfather is indeed a direct descendant of Bob & Jane Ealy and Lucy Kennedy, placing him in one of those three family branches. He suspects that his maternal grandfather may still be living in Detroit.  He would love to connect with his biological family.

To all of my Ealy and/or Kennedy family members, especially those in Detroit who read this post, please share this blog post with other family members. Someone may know something and can connect him with his family. If anyone has additional advice to help Christopher locate his birth family, feel free to post a comment here or e-mail me at melvinjcollier@ yahoo.com or Dr. Christopher Harris at wasun67@hotmail.com. 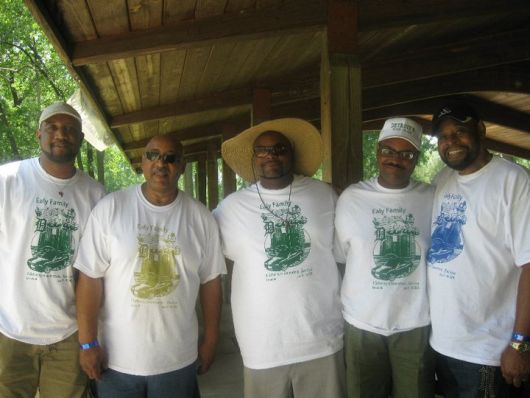 Me (far left) with cousins at the 2010 Ealy Family Reunion in Detroit, Michigan
Posted by Melvin Collier at 10:09 PM 8 comments:

DNA Continues to Amaze Me!

This week, my cousin NeNise Smith’s DNA results were calculated by 23andMe. She told me several weeks ago that she had taken their DNA test.  As predicted, she appears in my Relative Finder database! Recap: 23andMe asserts that their “relative finder finds relatives by comparing your DNA with that of other 23andMe users. When two people share identical segments of DNA, this indicates that they share a recent common ancestor. Relative finder uses the length and number of these identical segments to predict the relationship between people.” (Source: 23andMe.com)

I am especially excited about NeNise’s results because now I can compare our results to a mutual cousin, Lenro Morgan, who took 23andMe’s DNA test last year. NeNise, Lenro, and I all share two sets of ancestors – Robert Ealy & Jane Parrott Ealy and Lucy Kennedy Cherry and the father of Lucy’s oldest children. (See this post This is Frustrating! for an explanation concerning that father).  Three children of Robert & Jane Ealy of Leake County, Mississippi married three of Grandma Lucy’s children.

This is how our DNA results compare: 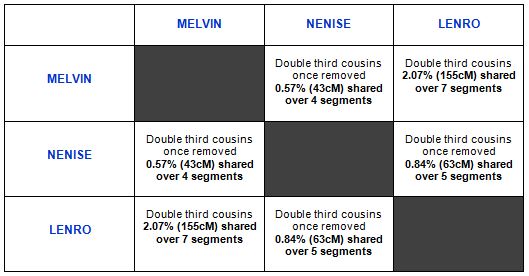 But, what is particularly interesting is to see on which of my 22 chromosomes I am related to NeNise and Lenro: 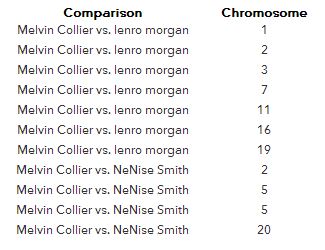 DNA enthusiasts, feel free to share other observations from this DNA comparison. I love gaining additional knowledge and thoughts from others.
Posted by Melvin Collier at 7:35 PM 6 comments: