Recently, someone asked me about the reunion video documentary that my cousin Kristina Hayes produced of our commemorative family reunion in 2009. That groundbreaking event in Atlanta, GA and Abbeville, S.C. reunited branches of our family tree after 150 years of separation. This is the reunion that culminated the book, 150 Years Later: Broken Ties Mended. As promised, I am resurrecting the YouTube links of this reunion documentary on my blog. Totaling 30 minutes, the entire documentary was divided into five short clips which are below.

In a nutshell, the following is the family that was separated in 1859 in Abbeville County, S.C. That year, William Barr Jr., the son of the late Rev. William & Rebecca Reid Barr, decided to relocate to Pontotoc County, Mississippi. He took most of the family slaves with him which split the following family tree.

What happened to the family?

LEWIS & FANNY – According to a letter that Rebecca Barr wrote to her sister in 1847, Grandpa Lewis died in Sept., 1846 at an old age, possibly around 70. Born somewhere in Virginia around 1785 and sold down South to Abbeville, S.C. by 1810, Grandma Fanny was taken to Pontotoc County, Miss. in 1859. Her nearly 75-year-old body endured William Barr's wagon train journey to northern Mississippi, which took days. According to the 1880 census, her grandson, Rev. Jacob Beckley Jr., was taking care of her. She died after 1880 at nearly 100 in Pontotoc County. Lewis and Fanny’s African roots are revealed in clip 1 below.

Glasgow Barr – He was never taken away from South Carolina. He and his wife Rosa, who had been enslaved by a neighbor Lesley Family, were found in the 1870 and 1880 censuses in Abbeville County. Children and grandchildren of Glasgow were also found in the 1900 Abbeville County, SC census. After that, I haven’t found a trace of the family. Not sure what became of his descendants.

Sue Barr Beckley – William Barr Jr. took her, her husband Jacob, a “mulatto” slave he had purchased from the Lesley Family, and their children to Pontotoc County, Miss. in 1859. After slavery, the family took the Beckley surname. Sue Beckley and four of her children, Sina, John, Susie, and Patsy, lived in Oxford, Mississippi in 1880. Her sons, Edmond, Cannon, Lewis, Clay, and Jacob Jr., and her daughter Louvenia remained in Pontotoc County. Those sons became known as “The Beckley Five”. The Beckley Family has held large family reunions every year since 1957. 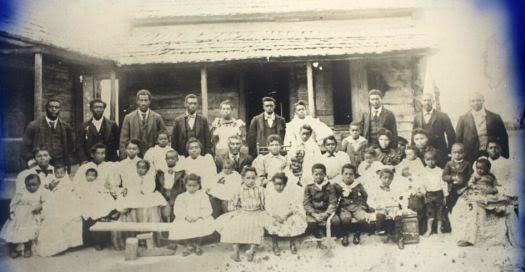 Pleasant Barr – Shortly before relocating to Pontotoc County, William Barr Jr. decided to sell Pleasant, my great-great-grandfather, to a man named James Giles. Giles relocated to Tippah County (Ripley), Mississippi around 1859, taking Pleasant with him. After slavery, Pleasant retained the Barr surname, remained in Tippah County, remarried to Amanda Young, and had another son, Elijah Barr. His older children, namely William (Bill) and Mary, had been sold to Rebecca Barr’s nephew, Lemuel Reid of Abbeville. They never saw their father again, according to oral history. Bill, Mary, their first cousin Glasgow Wilson (son of Glasgow Barr), and others migrated to Panola County, Mississippi shortly after slavery in 1866. Bill Reed (1846-1937), my mother’s paternal grandfather, married Sarah Partee, had 11 children, and the family tree grew by leaps and bounds.

Sawney Barr – William Barr Jr. took him to Pontotoc County in 1859. According to the Mississippi Historical Society, Sawney was a blacksmith who worked in a blacksmith shop in the town of Pontotoc, shoeing horses for both the Union and Confederate Armies during the Civil War.  After slavery, he became a prominent figure in the county during Reconstruction (1865-1876).  He was recorded in Pontotoc County’s history as the First Superintendent of Education for Pontotoc County. However, the political gains of African Americans during Reconstruction were wiped out.  The racist Klu Klux Klan increased their reign of terrorism across the South during the 1870s, and many African Americans were forcibly ousted from these important positions. I haven’t found Sawney in any censuses or records after 1870. He had married and had at least two children, Frank and Anna.

The paper trail that unearthed and documented my family’s plight and separation included but were not limited to the following:

In conjunction with oral histories from the Reed and Beckley families, 150 Years Later: Broken Ties Mended tells how all of these sources and more unearthed our family story.

This photo was taken on the steps of the Abbeville County, South Carolina Courthouse, August 8, 2009...150 Years Later.

Posted by Melvin Collier at 2:32 PM