Many Family Trees Are Wrong as Two Left Shoes

Not surprising to many researchers, many online public family trees on Ancestry.com and other sites are wrong! Several days ago, my new-found cousin Janice found an interesting death certificate on Ancestry.com that contained family names. Turns out, after further investigation, it was of our 4th-great-aunt, Brittianna Bass Early; she remained in North Carolina because our ancestors' prior enslaver, Council Bass on Northampton County, N.C., willed her in 1830 to one of his three daughters who remained in North Carolina. This daughter was Mrs. Charlotte Holloman of Hertford County, N.C. My third-great-grandmother, Beady Bass, and her children, along with her elderly mother Rose and her brothers, Harry, Jackson, and Seneca Jr., were taken to Hinds County, Mississippi by 1849 because Council Bass had bequeathed them to his daughter, Mrs. Elizabeth (Bass) Bass, who settled in Mississippi. Cousin Janice’s third-great-grandmother, Jemima Bass Mayo, and her children were taken to Madison County, Tennessee by 1835 because Council Bass had bequeathed them to his daughter, Mrs. Martha Bass Mayo, who settled in Tennessee. Grandma Beady and Aunt Jemima were Brittianna's sisters.

Item 5th: I give and bequeath unto Charlotte Holloman my daughter two negroe girls named Barsilla and Brittania to her and her heirs forever. (Will dated Sept. 2, 1830, Northampton County, NC.) (Source)

Well, prior to the discovery of Aunt Brittianna’s death certificate, I had researched Charlotte Bass Holloman, with hopes of locating Barsilla and Brittianna. Google searches, Ancestry.com searches, and other searches yielded nothing about Charlotte Bass. Not even a marriage record on familysearch.org was found. All of the public Bass family trees that I saw online had no information regarding her husband, whose name was simply noted as “Holloman” in many family trees. When I searched only using the wildcards "Charlotte Holloman," nearly all of the online family trees had her listed as a wife of James Holloman of Hertford County, North Carolina. However, those family trees had her maiden name as Charlotte Everett or Charlotte Holloman. Here are two examples: Example 1, Example 2. Even on Genforum.com, a researcher asked in 2000 if Charlotte Bass’ husband was James Holloman of Hertford County. A responder refuted her claim in this post.

Therefore, I felt it would be a waste of my time to look for Barsilla and Brittianna in Hertford County in 1870. I was wrong! When Cousin Janice alerted me to Aunt Brittianna’s death certificate, I soon found her and her husband, Langley "Lang" Early, and their children in the 1870 Hertford County, North Carolina census! Check out who their next-door neighbors were! 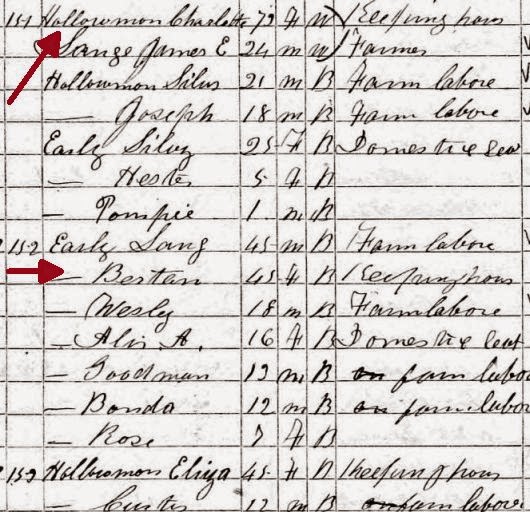 James & Charlotte Holloman were also found in the 1850 census. Why did researchers conclude that Charlotte was not the daughter of Council Bass but the daughter of Cornelius & Judith Everett Holloman? Were there two couples named James & Charlotte Holloman in Hertford County? If these public online family trees are inaccurate, how many more out there are just wrong as two left shoes? Also, this scenario could be a research tip that many researchers of white families should consider tracing the formerly enslaved African-American families that lived nearby in 1870 to find clues about their own ancestors. Would not Aunt Brittianna Early’s reported maiden name (Bass) on her death certificate have been evidence for a descendant/researcher of Charlotte Holloman that she was the daughter of Council Bass….if that researcher had suspected it beforehand? To add, if AncestryDNA’s DNA Circles are based on submitted family trees, and if many of them are inaccurate, then…. You get the picture? 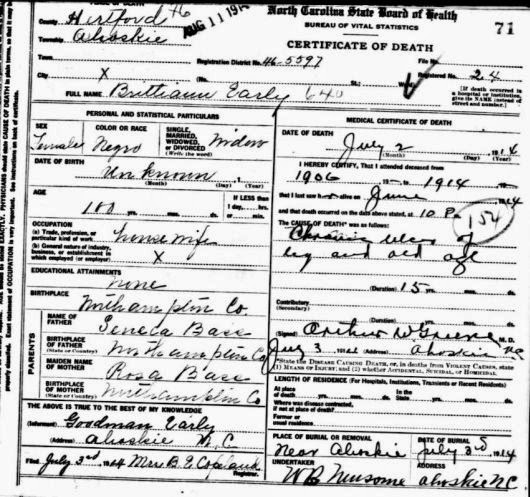 Special Note: If you know a descendant of James & Charlotte Holloman, please share this post with him or her.
Posted by Melvin Collier at 8:01 PM