The Tikar People of Cameroon 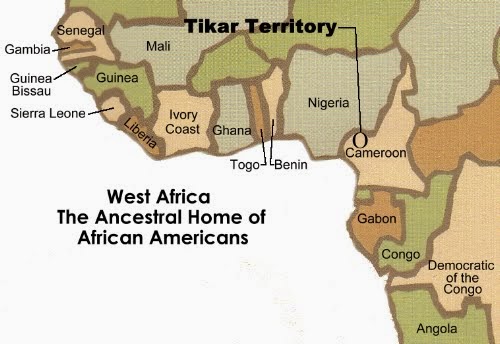 Africans from the Bight of Biafra region (Nigeria, Cameroon, Equatorial Guinea, and Gabon) comprised of the largest group (40%) forcibly transported to Virginia ports during the transatlantic slave trade. Recent research by Dr. Lisa Aubrey and her team uncovered 166 slave ships from Cameroon. More info about that discovery can be read here. This history of the Tikar people was shared by Dr. John Q. Williams, who received this information from members of the Tikar people of Cameroon about their history.

A special thanks to HAMADJAM Raphaël Athanase Elisée of Douala, Cameroon for sharing the pictures below with me.

According to the oral and documented history of the Tikar people, they originated in present-day Sudan. It is believed that when they inhabited Sudan, they lived adjacent to two groups. The first group comprised of iron-makers/blacksmiths and carpenters in the Meroe Kindgom; this group (ancestors of the Mende people) later left the Sudan and moved west towards Lake Chad. They eventually traveled to the Mali Empire, and along with the town Fulani and Mande, founded the Kingdom of Mani. The second group - ancestors of the Fulani - arrived in the Sudan from Egypt and Ethiopia. These cattle and goat herders moved west to Lake Chad near present-day Cameroon, Niger, and Nigeria before traveling across West Africa. It is believed that when the ancestors of the Tikar were in the Sudan, they lived along the Nile River. There, they developed their cattle grazing, iron-making, horse riding, and fighting skills.

At some point in time, the ancestors of the Tikar moved from the Sudan to the Adamawa Northern Region of present-day Cameroon. They settled in a village they named Ngambe (present-day Bankim District) where they intermarried with selected grassland farmers and animal herders.

During the mixing with selected grassland residents, a powerful chief and eventually king came to power. With the skills brought from the Sudan, the Tikar king was able to rule most of northern and central Cameroon. After the death of the king, his oldest son inherited the throne. Soon afterwards, his second son, Share-Yen, and his followers moved to present-day Mfounbam district and started the Mbamound Clan. Ngouo-Nso, a sister, and her followers moved to present-day Koumbo District and created the Koumbo Clan in the present-day state of Mbanso near Mbamenda. The youngest brother moved further south and created the Mbafia Clan in the present-day Mbam state.

The Tikar Empire had strong political traditions.  At the height of the Tikar Empire, fifteen kingdoms or clans existed; the Ngambe was the largest. Future kings and the ruling class always came from this clan and all clan were headed by a Fon who supervised nobles, large farm producers, military leaders, merchants, and town leaders. With superior weapons and fighting on horseback, Tikar soldiers protected the empire, maintained domestic peace, and collected taxes. A caste system existed, but the standard of living for the Tikar was above those from other ethnic groups. The Tikar people was known for their sophistication in government, war, and the arts - including a bronze casting process for making masks.

While the Tikar lived in Cameroon, most of the people with Tikar ancestry lived the "good life". Vocational training was the norm for Tikar boys, and teachers taught various forms of craft-making, woodcarving, mask carving, and making bronze sculptures. The Tikar people also developed a process for using hot wax to make masks and bronze sculptures. During the height of the Tikar Empire, many Tikar people were also gifted in music, dancing, acting, and writing.

The Tikar people had control over the trade routes between the Fulani and Hausa merchants to the north of the Tikar Empire and coastal ports. Due to the Tikar's advanced ceramic techniques and architecture/iron smelting kilns, products were exported north to the Hausa people and south to coastal ports.

For three centuries, the Tikar ruled present-day Cameroon and Central Africa with sophistication, but with a iron fist and heavy tax burdens on people from other ethnic groups. It was also reported that because of their high standard of living, there were more than one million people with Tikar ancestry by 1800.  However, trouble came.  Research revealed that by 1800, several African ethnic groups had joined the Europeans to fight the Tikar people, who were known for their quick ability to learn and their sophistication and for being hated by surrounding Africans.  The Tikar were unable to obtain modern weapons; they were never able to take control over the coast. So, they were caught in the middle between the coast and the north.

As the Tikar people attempted to abandon their traditional grassy savannahs and the plains where they were easy slave trade targets with no natural protection, they were forced to leave their villages with slave traders on one side and four hostile tribes on the other side seeking revenge. One of the strategies they applied to fight off the enemy was to dig moats around villages; these still exist in at least five kingdoms. However, this strategy failed and the survivors found refuge in the forest.

The transatlantic slave trade drained their brightest and most physically fit young people. Having been greatly weakened by war and the slave trade, they became vulnerable to neighboring groups who had been subjected by the Tikar for several centuries. When slavery ended, there were between 60,000 - 75,000 Tikars in Cameroon, and most of them were hiding in forests from slave traders. Today, less than 100,000 Tikars live in Cameroon. They live as small and scattered related groups in the northwestern highlands near the Nigerian border. Much of the Tikar area lies in Cameroon's Adamawa plateau and the western highlands.

The Tikar are among the most industrious people in Cameroon. Urban Tikar boys score the highest marks on math examinations. Most Tikar children earn the highest grades in school.  Urban Tikar students are reported to be the most gifted in arts and crafts, music, writing, and math.

Popular evening Tikar meals include: (1) chicken and tomatoes served on top of rice, (2) thick soups with hot spicy seasonings served on chicken, and (3) a form of fufu. Thick soups served on yams are often eaten in the morning. 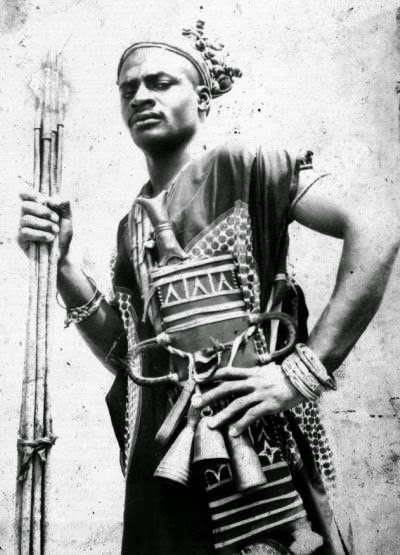 GAH II Ibrahim, the chief of Bankim, the history capital of the Tikar people.
There are many Tikar villages - Ngambe, Magba, Ntem, Bandam - but the main Tikar village is Bankim. 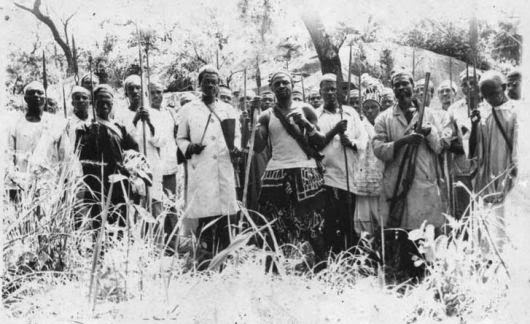 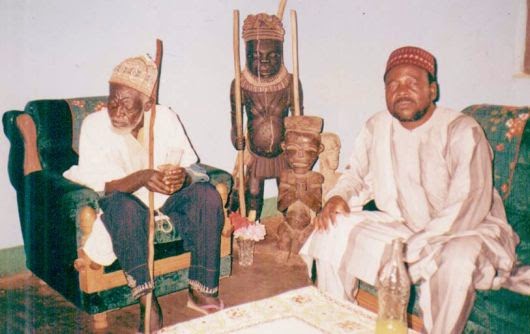 Left is the Chief of Ina (Tikar village) and right is the actual Chief of Ngambe (Honore MBGAROUMA). 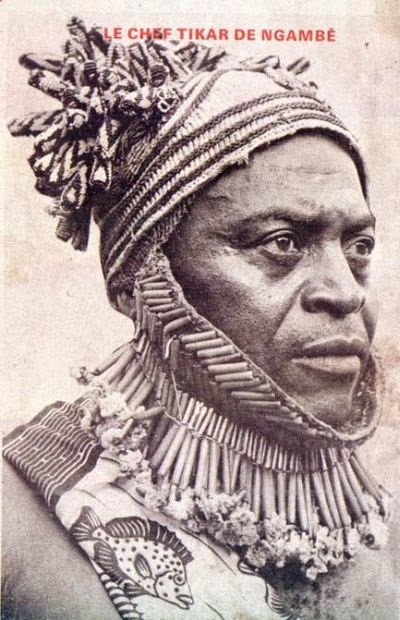 This is a picture of the late chief of Ngambe. Ngambe is one of the Tikar villages. Around his neck is an ivory collar made of elephant tusks. He carries it only once per year, during the time of the festival called "Sweety". It is a traditional Tikar festival during which one calls upon the spirits of the ancestors and asks them to bless the community.