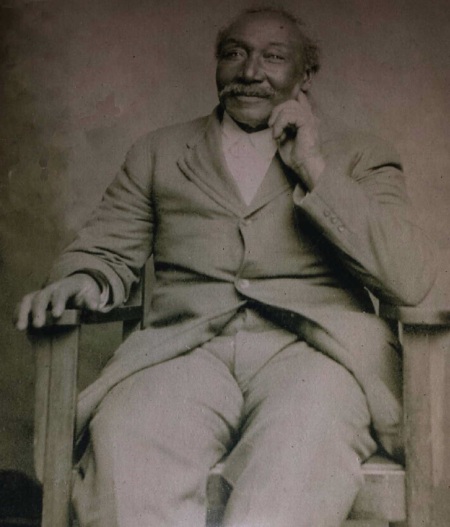 I actually gasped when I laid eyes on this magnificent picture! John Israel Towner of DeRidder, Beauregard Parish, Louisiana was born in Mississippi on March 20, 1853, according to his death certificate and his tombstone. Therefore, he had been enslaved for the first 12 years of his life. I am enamored by this picture for two reasons. First, he is exuding joy in this picture, and he was a man who likely endured a lot of hardships during his life, before and after slavery. I seldom see photographs of people smiling in old pictures. But Cousin John Israel is illuminating with happiness. He was probably counting his blessings, including the fact that he was able to purchase and take this picture before he died on October 27, 1938, at the age of 85. In 1930, when the census taker visited his daughter Julia Ida Towner’s home in the town of DeRidder on Midway Road, with whom he was living, he was noted as being a janitor at a local school. At the age of 77, he was still a strong man who was still holding down a job.


Secondly, this picture fascinates me because I am looking at the face of another close relative who had been born into slavery, in addition to how my family’s relationship to him and his family was discovered. I discovered that Cousin John’s mother, Ellen Towner, who was born around 1834 in Virginia, was very likely a sister to my father’s great-grandmother, Jane Parrott Ealy of Leake County, Mississippi, who was born around 1829, also in Virginia. After 1860, Grandma Jane and Aunt Ellen never saw each other again. Aunt Ellen and her children were taken to the southwestern corner of Louisiana, near Texas, to the Sugartown community of Beauregard (then Calcacieu) Parish, probably right before or during the Civil War. Over 300 miles now separated them….permanently.

How did I figure this out? Well, DNA uncovered Aunt Ellen. Had it not been for DNA, she would have remained an unseen ancestor. She is no longer invisible. Fortunately, a number of her descendants are taking an autosomal DNA test, and I hope that many of them will learn more about her via this blog post. With six pieces of evidence – two DNA pieces and four genealogical pieces – this is how I connected the dots.

Two of Grandma Jane’s great-grandchildren, my father and his first cousin, F. Kennedy, and at least five other descendants are sharing DNA with great-great and great-great-great grandchildren of Aunt Ellen. Specifically, my father and his first cousin are both matching at least 8 descendants, from 16.8 cM to 89.1 cM. See chart below. Most of these 8 matches took the AncestryDNA test, so I am unable to utilize a chromosome browser and DNA triangulation, which are essential in determining and verifying family connections with DNA. That’s why many genetic genealogists, geneticists, and DNA scholars strongly recommend that AncestryDNA test-takers upload their raw data files to GEDmatch. Nonetheless, matching numerous people who all descend from the same ancestor points to that ancestor, especially when no other connections are found.

N. Smith and V. Jones, two female descendants of Grandma Jane, and C. Harris, a male descendant of Grandma Jane, share DNA on the X chromosome with three of Ellen’s descendants. Utilizing the X-DNA inheritance chart, I was able to determine that Grandma Jane could have been one of the contributors to their X-DNA, and that segment matches some of the X-DNA that those three descendants of Ellen could have inherited from her. Those three descendants (A. Williams, L. Matthews, & M. Gillespie) are two half-sisters and their father’s niece. That X-DNA that all six of them inherited came from a MRCA (Most Recent Common Ancestor), which would be a parent of Ellen and Jane. Therefore, sharing DNA on the X chromosome is a big piece of DNA evidence.

Virginia was reported as Ellen’s birthplace in the 1880 Calcasieu Parish, Louisiana census, although Mississippi was reported as her birthplace in the 1870 Calcasieu Parish, Louisiana census. To add, Virginia was reported as the mother’s birthplace for most of Ellen’s children in the 1880 and later censuses. Therefore, this strongly indicates that Ellen was likely born in Virginia. This is important because Grandma Jane was also born in Virginia around 1829. Research has uncovered that her enslaver, William Parrott, moved his family and slaves from Lunenburg County, Virginia, to Leake County, Mississippi shortly before 1840. Ellen’s age was reported as being 35 in 1870 and 46 in 1880, placing her time of birth around 1834.

Determining Martha’s maiden name (Atkinson) proved to be an eye-opener because I found Martha and her parents, Manson & Elizabeth Atkinson, in the 1860 Leake County, Mississippi census. They had migrated to Sugartown, Calcasieu Parish, Louisiana shortly after the 1860 census was taken. Mississippi was sometimes reported as the birthplace of Ellen’s older children, who were born from 1850 to 1861. Additionally, Ellen’s oldest daughter, also named Ellen, was married to Arthur Atkinson, who was also born in Mississippi and who later went in the surname of Atkins after 1870.

Manson Atkinson was also found in the 1860 slave schedule of Leake County, Mississippi. However, the census taker reported “Manson Atkinson for himself and 2 others” as being the owners of 28 enslaved people. Well, who are the “2 others”? I noticed that in the 1860 census, Manson’s household contained five children, ages 16 to 8, who had the Towner surname. Their relationship to Manson has not been determined. Perhaps, the “2 others” may have been the oldest Towner children, John Towner, age 16, and James Towner, age 14. Interestingly, the census taker noted that John Towner was a student, with a personal estate valued at $11,000. This likely included slaves. This finding establishes the fact that the Towner surname is indeed connected to the white Atkinson/Iles Family. Perhaps, those Towners also moved to Louisiana with the Atkinsons, transporting those 28 enslaved people with them?? I did not find them in the 1870 census.

Since slave schedules do not contain the names of the slaves, this record can only serve as an aggregate piece of circumstantial evidence, to show that a female girl matching Ellen’s age was not enslaved by William Parrott anymore by 1860. Maybe one day, I will find a court record or something that supports my theory that William Parrott had sold Aunt Ellen to the Towners or Atkinsons, who moved her to southwestern Louisiana. But the DNA and genealogical evidence at hand are pretty compelling, in my opinion. Aunt Ellen, I see you! You are now visible!
Posted by Melvin Collier at 9:32 PM